As soon as they start giving Michelle the second chemo cocktail, (non-alcoholic of course), she starts having an allergic reaction to it. She goes into Anaphylaxis Shock. 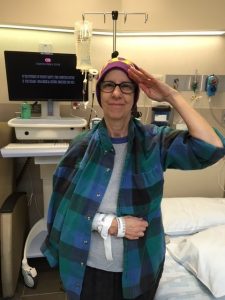 First she starts itching all over, then her blood pressure starts to drop and she’s having a hard time breathing. Then her blood pressure drops more and all hell breaks loose. I felt like I was in an episode of Orphan Black! It was like the nurse clones, first there was one, then there were two, then three until there were about seven nurses in a room all working, looking, panicking, putting oxygen in her nose and checking blood pressure. Holy shit I was freaking out! I kept looking at the blood pressure machine not understanding where the important numbers were. It just seemed like it was going down and down. Michelle is trying to talk, but can’t and the next thing I know they’re getting a gurney and putting her on it and taking her to the ER which happens to be connected to the chemo center. That was convenient don’t you think? As they are wheeling her in a woman says to me, family only allowed and I said I am family and she asked me who I was and I said I was Michelle’s wife. Boy, that’s where that marriage thing comes in handy. I really started thinking about the people who didn’t have that luxury and could never see their loved ones in this situation.

ER was insane!!! I feel like I’m in an episode of ER or Grey’s Anatomy without the pretty people. There were rows and rows of people on gurneys in the hallways. Waiting for a room? Is Michelle going to be one of them? Then there were cops everywhere and they were taking reports and I looked in one room and a woman’s face was completely bloody. And then I heard the word attacked and realized this must be the norm here. Well I guess Michelle was lucky because we got right into a room. So now Michelle is still really, really out of it and they hook her up to oxygen and try to get her hydrated. In the course of being there we saw about six different nurses and two different doctors. She had a chest x-ray, EKG and blood work done and little by little her blood pressure started coming back to normal. All I wanted was to take her home. I hated to leave the room to find a bathroom because I was afraid of what I was going to see out there. You see I can’t watch TV medical shows because I faint at the sight of blood. I kept my head down and found a bathroom without getting lost.

Finally 14 hours later at 10:30 p.m. we got to go home. But, I had to get the car and it was back at the cancer center. I didn’t know you had to pay inside and I’m at the box trying to put, first cash and then my credit card in to pay but it wouldn’t take either one. By this time I was done! I wanted out now! When I called for help on the call box the poor guy got the brunt of my 14 hour anxiety attack. I told him I couldn’t get out, he said something and I could not understand anything he was saying and I was screaming and screaming and he finally just opened the gate and let me go because I was a mad woman! At least we got free parking that day. Oh and one more thing, I got lost trying to find the ER entrance to pick up Michelle, of course!