SIDE EFFECTS, ANTIDEPRESSANTS, A GIRAFFE, AND GOOD NEWS!

So we go to see the doctor and she tells us obviously Michelle can’t use that chemo anymore and she has to change it. So she decides we will stick with the first new chemo 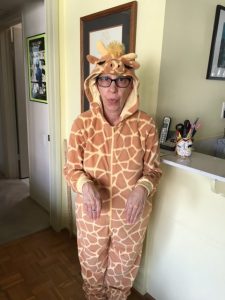 and add a similar second chemo to the one that Michelle was allergic to. This new, old chemo is not used much anymore but it’s still a good option. I’ve made a decision not to go into the technical names of these chemos because I just didn’t want to go in that direction. And I can’t spell or pronounce them anyway. I certainly google them! I know way more about chemo than I ever wanted to. The biggest drag about this new chemo is that it’s going to give her neuropathy, which the last chemo wasn’t going to do and that was a big issue with Michelle. Nerve pain is worst for someone with fibromyalgia and she is still suffering from it six years after the last treatment.

And now we come to side effects. Chemo side effects are very, very scary and completely random. Everyone is different, so everyone is going to experience the side effects differently. So with this chemo besides the neuropathy, she might experience kidney damage and permanent hearing loss. What did she just say? And the other new chemo she is taking, the side effects are peeling red hands and feet, stomach problems, everything tastes sour, and terrible fatigue. Fatigue is the MO for both the chemos. So far she has the terrible fatigue, sour tasting food and stomach problems. The thing that makes this so messed up is that every time Michelle feels something a little weird, she just thinks it’s another side effect coming on. It’s really an unfortunate way to live going through this and not knowing what side effect is going to take effect when. This new chemo is every four weeks for two short days. So we have a week and a half before we start back and hope all goes well.

As for me, I decided to try antidepressants for the first time in my life. I tried one kind and the side effects were horrible and I was in the middle of trying the new one when all this was going down with the allergic reactions and hospitalizations. My timing sucked. Let me tell you I became a mad woman! I was jumpy, I was more depressed than I was before, I was nauseous every day and was losing weight, I was in a brain fog, and I was 10 times the airhead I normally am and that is something! I was a mess. So I decided enough, I’m done with this, I’m done with antidepressants I’m just going to have to get by on my own and maybe learn to meditate without judging myself. I will sit down to try to meditate and every time my mind wanders I decide that I am a failure at it. Instead of clearing my mind, my mind is going crazy. I’m doing it wrong, I’m doing it wrong, I’m doing it wrong! I’m a failure I can’t do this, I’m doing it wrong. And I look up and two minutes have gone by. Very relaxing!

Michelle has been so strong! Because she has to work a certain amount of hours to keep our health insurance, she pulls herself together through the terrible fatigue and has been able to work short days. On Halloween she wore a giraffe costume. Her little bald head worked perfectly with the costume. She’s trying to keep her sense of humor as well.

And now I’m saving the best news for last. With all the problems with the chemo and the fact that she only got the full dose one time out of three her tumor markers went from 50 to 18!!! The doctor was very, very happy with that and we are really relieved that something is going right! A Very important something!!