Back to the Hospital once again with Dancing Nurses, Breadcrumbs, and an Elephant Condom – Part 1

It started Thursday when Michelle wasn’t feeling well at work. It’s lucky she has a good relationship with thermometers because she took her temperature and it was 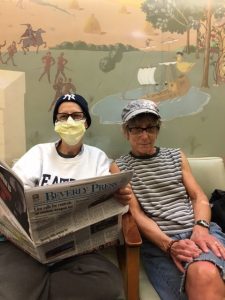 100.5 then 100.6. When you’re going through chemo you are supposed to call the doctor if your temperature reaches 100.5. Of course I panicked and called my sister Heidi, who is an RN and told her Michelle’s temperature was 106 and I didn’t understand why she almost jumped through the phone. As I’ve told you I’m not real good with numbers.

So here we are back in the ER. They give Michelle a mask because she can’t be around sick people and of course everywhere we look, there are sick people so they put us in the pediatric waiting room. We were just hoping no sick kids came in. Luckily for us the only kids that came in were twin boys and their Dad because one of the boys needed stitches in his head, maybe. Can’t catch that! An hour later we get a bed in the hallway waiting for a real room. They proceed to take blood in two different places from Michelle’s little arms and I swear they took enough blood from her to feed a vampire for 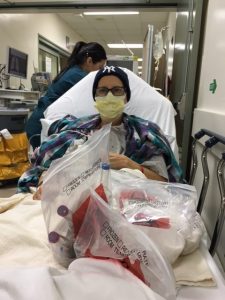 a week! Of course I did turn my head away because I can’t look at these sorts of things. As I did a nurse happened to start to fall, catch herself and do a little acrobatic routine. I told her I thought I was watching Dancing with the Nurses. Yes, she had a sense of humor. When the doctor finally arrived in his khakis he looked like an actor that would be in the reboot of the TV show Mash. He told us they were checking for infection and the fact that her temperature was so high that her white blood count could be low and that’s a very dangerous thing. So after I don’t know how long we finally got out a room, if you can call it that. Once again tests and more tests and finally they came back and said that yes, her white blood count was very low, dangerously low and they had to put her in the hospital.

No, not back to the hospital again????