4TH TIME’S THE CHARM, MRS. DOUBTFIRE, HUMAN PIN CUSHION, AND WHERE DID SHE GO?

I knew we were looking at a long day when it took us half an hour just to get the blood work done. We got to the cancer center at 8:40 am in a room at 9:30 am. I feel I 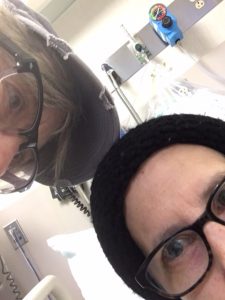 know these rooms so well I want to start hanging pictures. Maybe a movie poster. This is going to be the new chemo and it was supposed to take four hours. We were a little worried about the new chemo understandable considering what happened before. I decide I want to get my coffee early because I don’t want to miss anything.  As I’m walking to get coffee, I look ahead and see a four car crash in the middle of an intersection. Two cars are completely totaled. Seeing that made me realize other people are having a morning they didn’t want.

When I got back to the room, I noticed Michelle had this red stuff on her wrist. Turns out while I was gone the nurse which Michelle started calling Mrs. Doubtfire did something wrong and blood started squirting all over the sheets, pillow and floor. Well as I’ve said before, I cannot see even a small amount of blood let alone squirting all over the place so my coffee run was very good timing. I pictured Dan Aykroyd in that old Saturday Night Live skit when he played Julia Child and cut his finger cooking and the blood was squirting straight up in the air and all over. They started the prep meds and but poor Michelle, her IV was really hurting her and the nurse needed to move it which in itself was a frightful thought. It seems Michelle is going to become a human pin cushion today. So Mrs. Doubtfire takes the IV out and then we don’t see her again and she’s gone. She’s just gone and we’re waiting and waiting and waiting and waiting and I would say 45 minutes went by while nothing is happening with Michelle. If this were a movie the title would be, The Patient that time Forgot. I kept looking out of the room to see if I could find her but she was nowhere. Maybe she got scared off by all the blood and didn’t want to come back. Finally the head nurse came in and said she was the pro at finding veins and she was going to put the next IV in. Now we haven’t even started a new chemo yet but finally the IV is in and we’re waiting to start and again the nurse was nowhere to be found. She finally came back and we started the new chemo, held our breath and everything went well.

Now we’re going on six hours and I decide I need to walk to the store and get Michelle’s prescription and return some Tupperware to a friend that lives close to the hospital. On my way to the store I drop off the Tupperware in a mailbox of the house I thought was the right place. But on my way back, I realized that I had the wrong street and the wrong house, in the wrong mailbox. It’s lucky that the people hadn’t come home yet and I could retrieve it and return it to its rightful owner. By this time it’s taken me so long Michelle is done and she’s waiting for me. I get back, I get her and we break out eight hours later. This is only part one of a two-part chemo and we have to turn around and come back the next day. Can’t wait!