Cancer Spouse Finds Humor In Her Own Shortcomings

First let me just say that the caregiver is not one of my strengths. Saying that I am the nurturing type is like 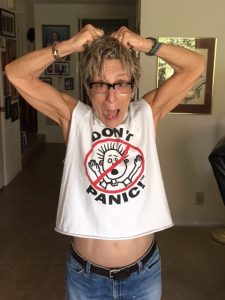 saying Donald Trump tells the truth. It’s just not in my DNA. So when Michelle was diagnosed with cancer the first time and went through chemo I did my best. I think I flunked. You tell me?

Nutrition is very important for someone going through cancer treatment. I’m all about healthy food as long as I don’t have to cook. I decided I was going to prove I could cook after all and I found a great recipe for a wonderful vegetable soup. I was very excited, but left on my own, I caused a disaster. Now you have to understand gourmet cooking for me is throwing a potato in the microwave. So making the soup I wasn’t aware that you cannot add oil to a hot pan without it pretty much burning up. That was my first mistake. But the biggest mistake of all was buying the wrong kind of canned tomatoes. I chose the spicy tomatoes with hot peppers in them without noticing. Between cooking and trying to rid the kitchen of the smell of burnt oil while it was making me gag I made the soup and was so proud. And when Michelle tasted it, we had to call the fire department to put out her tongue. It was so hot that no human could possibly drink it. It was the only meal I cooked for Michelle in the five months she went thru chemo. There is no upside to Michelle having to do the whole thing over again, but at least I get a chance to redeem myself and do a better job. I’ve already made some killer vegetable alkaline broth and the only mistake I made was filling the pot so high that it spilled all over the stove and underneath each burner not knowing about it until it started smelling a week later. I’m a work in progress.

As a cancer spouse, my strength lies in anxiety attacks.. The tricky part and the talent come in hiding it from Michelle. I’m better at it this time, but I think it might be taking a toll. Two examples of this happened in the same day. Michelle and I went to a cancer support center to have an intake to join some support groups. When we walked into the center the woman at the front assumed I was the cancer patient. Then when talking to the counselor, he told me that a lot of times it’s harder on the caregiver than the cancer patient because the cancer patient has a plan and the caregiver feels helpless looking on. After that we went to the store and a little girl about three years old looks at Michelle and said,” I love you, I love you, I love you. “Michelle said she loved her. Then the little girl turned to me and then turned back to Michelle pointed to me and said, “Is that your grandmother?”